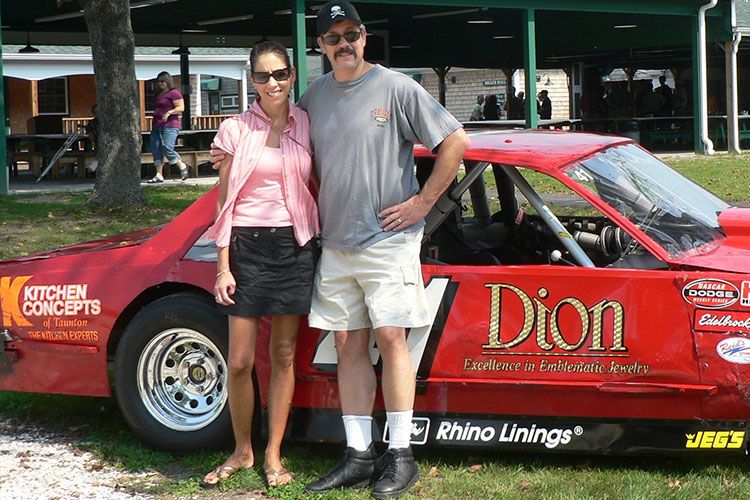 Steve Rullo is one of the longest tenured Dion employees outside of the Dion family.  He celebrated his 32nd company anniversary this past year.  We sat down with Steve to find out a little more about him and what makes him so special here at Dion.

Steve started his career at Leavens Award Company (incidentally another Dion Account Manager – Dana Higginbotham – also started there).  He started in the Pack/Ship area, then started full-time in the Enamel Room, where a few years later he became the Manager of this Dept.  He then moved to Packaging/Quality Control.

In 1985 Steve started at Dion, where he was the first employee hired that was not a Dion family member or previous friend of the family.  Steve ran production for Dion until 2006, when he moved into his current role as Account Manager.

When asked what Steve loves best about Dion, he unequivocally says it is the work culture.  Dion employees have great fun with each other and both “Play Hard” and “Work Hard.”  There are really quite a cast of characters here at Dion – and Steve is certainly one of them!

Outside of the office Steve has a number of interests.  One he is well known for is his love of hard rock & heavy metal Bands.  Steve’s first concert was Black Sabbath, and he hasn’t stopped since!  He has been to approximately 300 concerts (with a guitar pick collection to prove it!).  Steve is also an avid gardener – growing enough tomatoes annually to make homemade tomato sauce to last him for the entire year.  His cherry tomatoes are popular give-aways here in the office.  Steve has also been a regular racquet ball player for the past 25 years or so.

When asked what his most challenging jobs were throughout the years, Steve says that he has had several.  When UPS changed their logo, Dion had to produce thousands of new cap badges and pilot wings for their personnel in a very short time.  Another challenge was the Chrysler ring program that in some years had over 3,000 new rings and 7,000-10,000 updates.

Steve credits his success in this business to learning so much from his mentors and co-workers.  Who he is today is a reflection of all of the great people he has worked with throughout the years.