Reflections on a Recognition Career 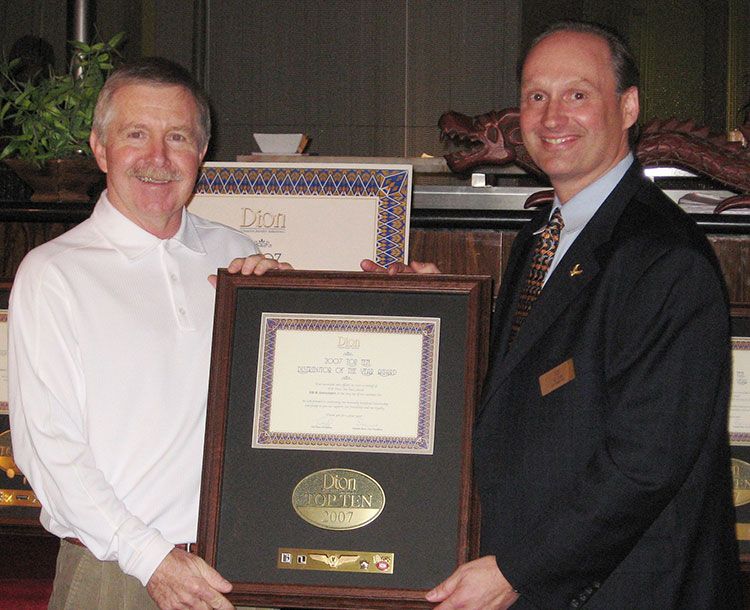 Dion and Dave Bell have had a long and rewarding partnership for many years.  We got together with Dave to reflect on this shared history and some of his many successful projects through the years.

Dave began his career with The Robbins Company – strictly by accident!  He knew nothing about them, but had a long-time friend who was the Regional Sales Manager in Ohio that recruited him into the business. Through a stroke of luck, the Regional Sales Manager position in Dallas opened up and was offered to Dave; the beginning a long and successful career in the business.

After leaving Robbins 23 years later, Dave started working independently with Dion on the benchmark Mary Kay “Ladder of Success” sales recognition program.  Several other manufacturers had tried to make this piece, but were unsuccessful in coming up with a workable and reliable mechanism for attaching the star add-ons to the main Ladder pin.  Dion developed a solution, won the business, and the rest is history!  This piece became an iconic jewelry symbol in the Party Plan/Multi-Level Marketing industry and the “concept” has been emulated by a number of Direct Selling competitors over the years.

Dave’s business has primarily focused on corporate recognition, frequently incorporating custom award jewelry.  Dave said that there are a numerous opportunities for custom designed award jewelry in the corporate marketplace. For larger companies and organizations, years of service emblematic jewelry is often the standard, particularly in the healthcare sector.  Multi-Level Marketing companies and those with large sales forces are ideal prospects for sales recognition jewelry including award rings.  Trucking/Transportation companies and companies with their own internal fleets are important prospects for safety and safe driving awards.  These types of programs are particularly “sweet” because they result in annuity sales that repeat year after year.

Dave emphasized that those individuals coming into the recognition industry today should not underestimate the power of custom designed award jewelry.  It is a truly unique category and has stood the test of time.  He believes that there will be a resurgence in popularity for award jewelry as new tax legislation being proposed will put added pressure on employers using awards such as gift cards.  Any award that falls under the category of “disguised compensation” will likely be deemed taxable to the employee recipient.

Outside of the office, Dave has a number of passions.  He lived for many years in Colorado and is an avid skier and angler.  He has even skied with the Dion brothers a time or two (he has a great story or two!!!).  A few years back he moved to coastal South Carolina, choosing that location partly because of the ability to pursue his primary passion all year round – GOLF!   Dave has played golf all over the country – including at the Edward A. Dion, Sr. Golf Tournament here in Attleboro.

Dave has enjoyed a rich and varied career in the recognition awards industry and we thank him for taking the time to share some of his experiences and advice with us.