Last year, ARS Division Sales & Marketing Manager, Scott Urquhart came up with a unique sales award that has turned out to be a huge hit with his sales force - a custom championship style sales award ring.

Through Seybert Sales Distributors, Scott worked with Senior Account Manager Ruby Vincent to come up with a ring design that screamed “CHAMPION” to his sales force of avid sports fans. Ruby showed him a variety of ring styles and ultimately the Dion Design Team came up with a stadium topped championship style ring with a blue inset stone and ARS crest on top.

Scott’s division does over $300 million in revenue annually, so competition is high for these rings. The sales force not only loved the ring design, but also the very exclusive nature of the award. Scott’s reports meet monthly via a virtual call, and know each other very well even if they do not physically see each other very often. So in true sales person fashion, winners love to “talk smack” on these calls. One winner proudly boasted, “I am so proud to have one of these gold rings, that none of you will ever have!”

Scott explained that he presents sales awards at each monthly meeting, but it is these President’s Club rings that his folks really want. The team can hardly wait for the annual meeting when these custom ring awards will be presented.

So when it was time to award this year’s ring winners, Scott once again worked with Ruby to come up with a new design to really knock the socks off his team. Taking elements from the Kansas City Chiefs Super Bowl championship ring, Dion designed a square ring top with pavéd diamonds surrounding the ARS logo. This year’s ring also allowed for the winner’s last name to be added on the right shank.

Now that presenting top sales performers with unique championship award rings each year has become a tradition, what will next year’s award ring look like? 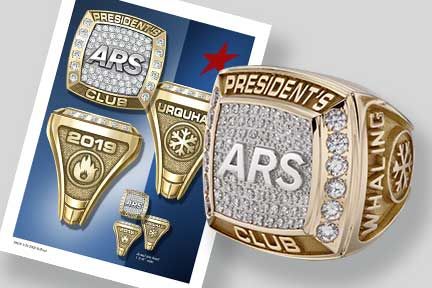 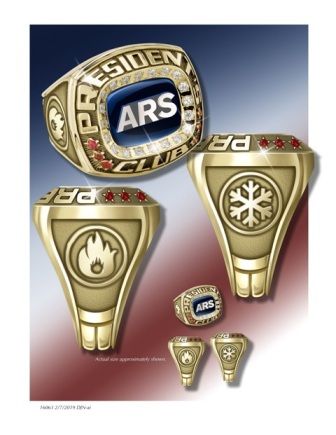